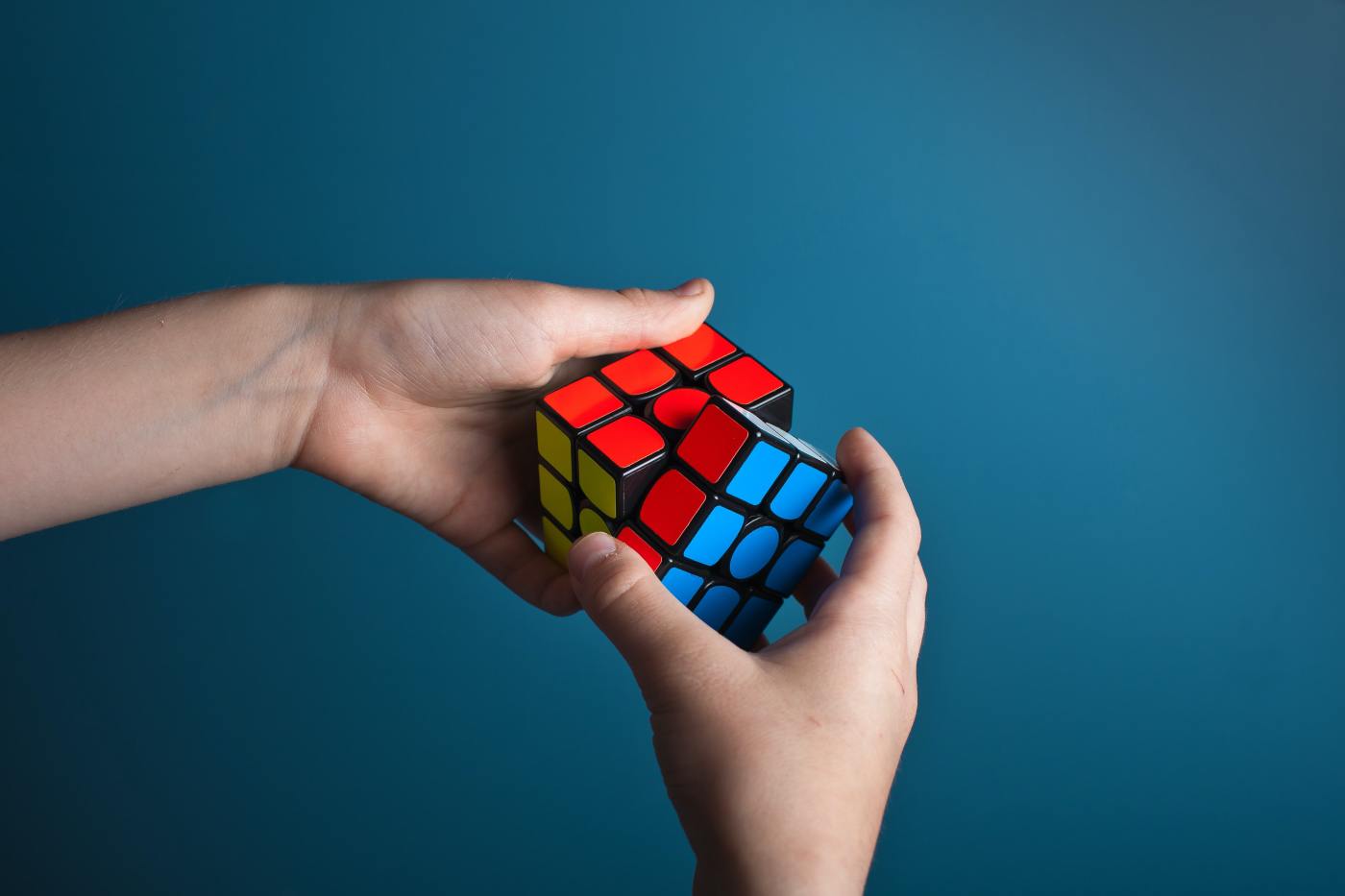 “Sometimes problems don’t require a solution to solve them; instead they require maturity to outgrow them.”

I think about problems like Rubik’s cube. You have this three-dimensional puzzle in which the object: is to match all the levels with their corresponding colors. Theoretically, the idea seems relatively simple, but once this device touches our fingertips. Well, we often don’t find it as easy as we should expect. With each crank and turn; confidence diminishes. Perspiration begins to form sodium infused droplets in the folds of the forehead. Tension and stress set in; another colorful match forces two off course. “Dammit” Who’d expect the level of difficulty it presents. Many will try to blaze through the calculation like equations of the final exam. Only to find they fucked up. “Oops”. Missing a single step could have you on playback like the stream of a buffering track. The color-coded device is a classic. I mean ‘today’ it’s a certain appeal that attracts onlookers. The ability to problem-solve requires a certain something: “Hmmm” Levelheadedness, an individual level of adaptability, or the ability to adapt under any condition or circumstance and mental agility. That’s because it’s imperative leaders maintain the ability to think outside of the box. I tell my soldiers all the time. Put rank aside. “Not all are born leaders, and you are all leaders; in their own right”. “Go act and think as leaders; figure it out.

Rubiks have been used in various studies with the intent of finding numerous ways the puzzle can be solved “Cool”. We tend to have that luxury with inanimate objects, i.e. a multitude of puzzles, even video games. What’s your death count in “Demon Souls”? Unlike our entertainment factors; human beings aren’t so durable. Mistakes don’t always equate to a second chance. The more we rush through our difficulties, the more we find ourselves simply going through the motions. The more likely we are to set the stage for future conflicts. At certain points it’s not even about gaining an understanding rather; getting through the bullshit. Evading another mishap or simply getting it over with. We want to understand a means to gain control of the atmosphere. This isn’t exactly advice for the outside entities. The actors in our office space and pawns in the foyer. In this instance it applies to those internal thoughts, questions and concerns that leave the sheets soaked beneath us; after several restless nights. The problems that interrupt our sleep. I truly hate this expression but; “Smooth is slow, and slow is fast”. In various professions, our tendency to rush out the kinks; leads to larger consequences. The aftermath can be astronomical. Sometime is best to take a moment to face the matter head on, even when it appears trivial. Now; let #L3ts7a1k4b0t1t

“Problems are not stop signs, they are guidelines.”

For several months I began to realize that I was acting out of character. At the time, I wanted to verbalize it as “change,” but my reality propelled me forward like a burst exhaust pipe. It was a minor setback. That was the reality check I needed to wake up to. Although I have no regrets. There was a time I felt discouraged – with myself. All I could think was, “That’s not me.” “What would others think,” “What could my soldiers say,” my family, friends.” “What’s going on”. I hadn’t seen myself in a mirror for a while. I stopped consulting my counselors due to my work; then came a pandemic. I became reserved and detached, but why? “Am I having a midlife crisis?” “Will I die soon?” In a book titled,“The Subtle Art of not giving a F***” the author, Mark Manson refers to this as the Feedback Loop from Hell. I became worried about trying to do the right thing, without considering. I had done anything wrong. I became overwhelmed; caught in another vortex of my own making. However, unlike the rabbit hole I’d previously resurfaced. I had no idea where this was going. “Here we go again”. Uhh, Houston. I think we have a problem!

With the gyms closed until further notice, nowhere to go. All I could do was think and work: then think some more. The more I struggled. Trying to rush an answer as if it would occur overnight was foolish. It’s not that simple, EVER! My moods were manic; I had lost stared to feel I was losing control; again.

STOP: We’ve been here before, you know what to do, so do it. Breath and re-assess. To bed, I guess. Hours later I awoke. Unsure of what happened ripped the phone from beneath my pillow:

The first of April. The spring of Ideas and here I am lying here staring at the ceiling again; when suddenly it hit me. This epiphany seems to have been plucked out of thin air. I’m here, in this place; dark and desolate. Where everything is the same yet so fucking unfamiliar. This realization hits me; insistently: I’m not happy. Now I know what you’re probably thinking: Oh, shit, here we go again. It’s the same thing that happened this time last year: PAUSE, no. Because last year, everything that happened was uncharted territory. A gaping black hole that haunted the depths of my soul for days, on end.

This time last year I was recovering; dealing with a separation, after 8 years wasted. The analysis of a suicide attempt; the trials of my life. Closing a chapter and starting anew. I was coping with it and preparing to hashtag #beginagain. This time last year I was finding MYSELF. To have invested so much in an investment that is not worth it. I dealt a bad hand. I used to sulk with regret, but now I wouldn’t be here. Doing this at 0300am. What I gained was self-assurance. I had become aware of myself in the midst of all this scattered debris; the aftermath that became the storm of my life. Last year, I identified everything I was and who I wanted to be.

Right now, I’m in limbo. Do I know who I am? Probably; not as good as I had hoped: after a year abroad. Around this time last year, I was ready to start again with nothing. Leaving nothing to hold me back: yet alas. So as Atlas stood gripping the world over his shoulders. This weight has shifted back into place, making breathing incredibly difficult – once again. It’s uncomfortable; I suppose it’s a test of my will. Perhaps that is where my resilience comes in. Every damn day is the same, nothing has changed. Wake up, conduct PT, return to room. Shower, change; report to duty. Work, Work, Work, Work, Work. That’s all I do: work, work, work, work, work. It’s like a time-loop. I’ve lost focus on the things I set out to do a year ago. A constant reminder: You’re a soldier 24-7. A sentiment I’m starting to resent, because this isn’t living.

*Self-Awareness – Conscious knowledge of ones, character, feelings, motives and desire.

I’m starting to get it now, at 0457. It took a match to kindle this fire, the desire to write after all this time. I don’t know what all this means, but I have a feeling. Things are about to get interesting: so, wait for it. The road hasn’t been an easy one: About six months ago I was in a crisis. It honestly took some time to reflect. That opportunity allowed me to bounce back. The first step to solving a problem is recognition. What happens next is all on you. Will you take whatever actions necessary, to find a resolution. Will you evade or allow it to consume you? The choice is yours.

NEXT UP: The Journey

This site uses Akismet to reduce spam. Learn how your comment data is processed.